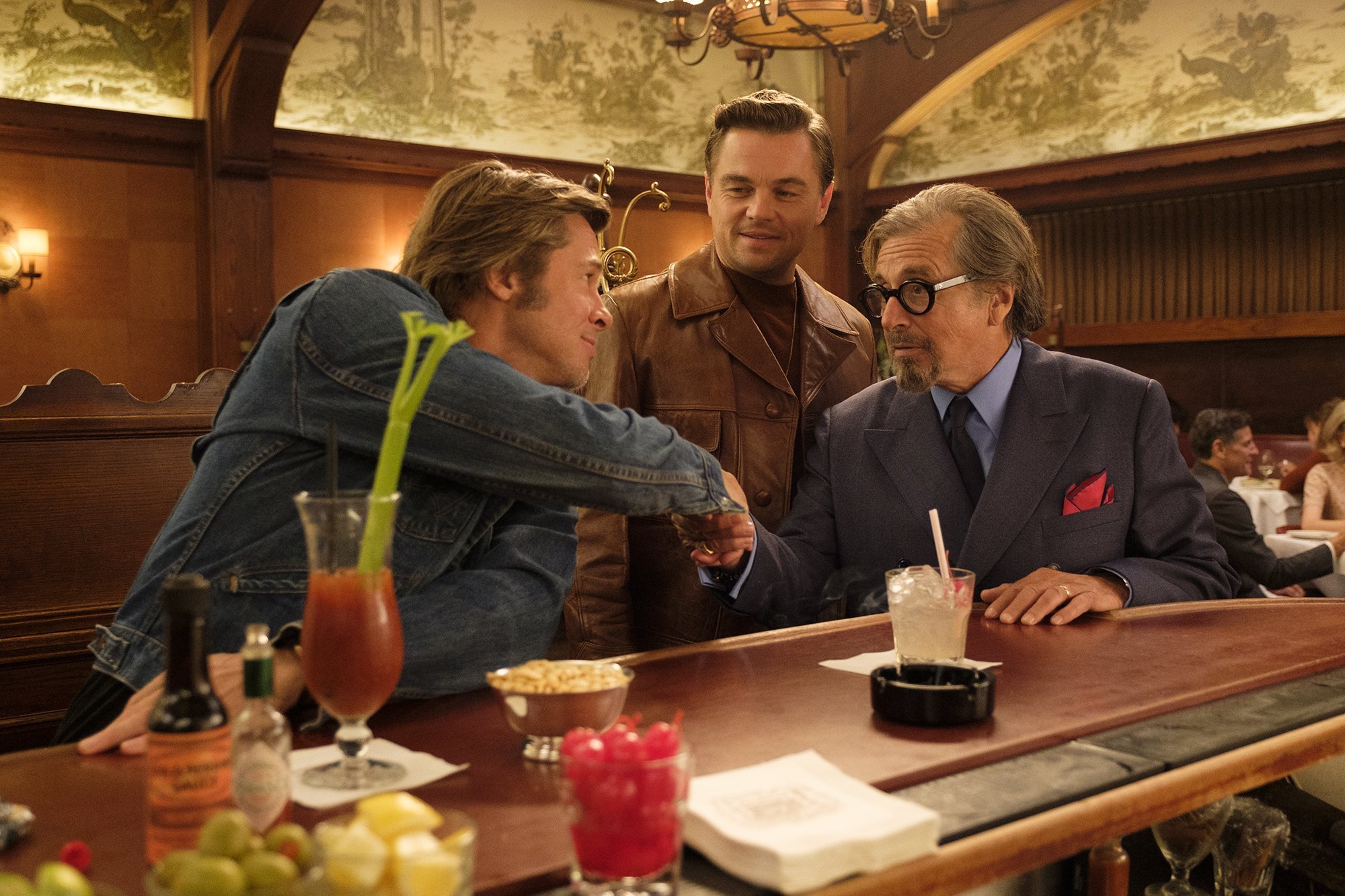 This review will contain spoilers.

August 2019 marked the return of (in)famous director Quentin Tarantino to direct a brand new movie in his signature style, Once Upon a Time in Hollywood. The genuine buzz and curiosity surrounding this movie from the get-go never seemed to truly ebb from the moment that the first trailer dropped. Whether in excitement or dread, everyone was anticipating going to see this movie, with its uniquely tangible 60’s setting and immensely popular cast that seemed to grab the attention of both the film buffs and the average moviegoers. And so, the crowds came in droves to see the film, and a little over two hours later, the world stepped out of the theater feeling extremely conflicted. Immediately and without hesitating to make their passionate opinions known, some jumped to claimed it was a fantastic cinematic masterpiece, others strongly refuted by calling it a dull failure, and still others felt unsure what to even make of the film, including myself initially. It was certainly a very different film, as Tarantino himself is known for, a film where the viewer’s personal perceptions of the more ambiguous events will have a large bearing on how they view the film as a whole. There’s also the notorious final 20-30 minutes that turn the film on its head and was met with even more polarized reactions from viewers. But before this can be discussed, it’s imperative to discuss the buildup and ultimate payoff that made Once Upon a Time in Hollywood a fairy tale worth looking at. 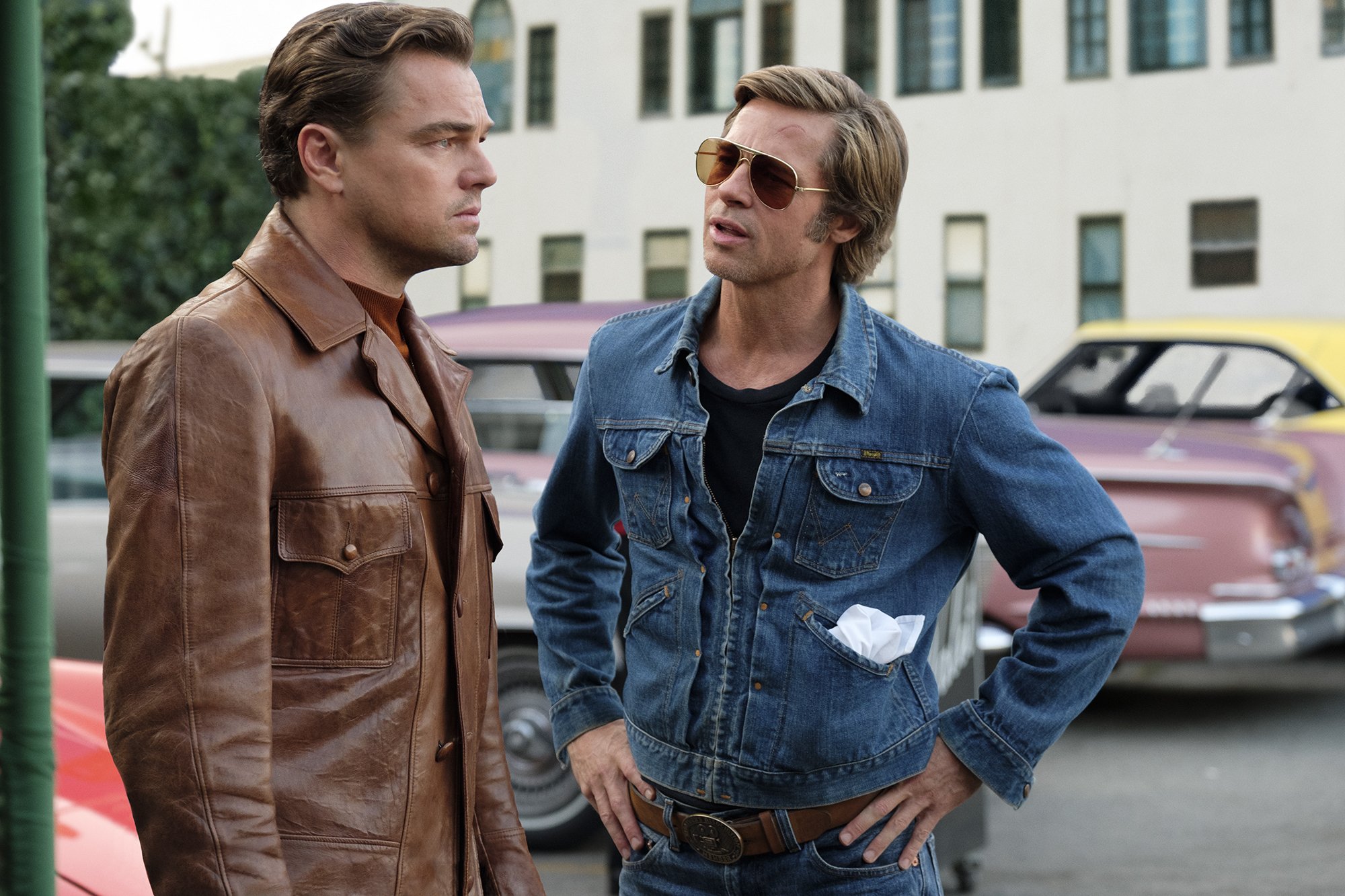 From the first second, Once Upon a Time in Hollywood is dedicated to immersing its audience in the setting, that being Hollywood in 1969, just as its golden age of film was coming to an end. We are quickly introduced to our cast of main characters, most notably Cliff Booth (Brad Pitt) and Rick Dalton (Leonardo DiCaprio). Rick is a famous Hollywood star when we meet him, known for having starred in an old beloved TV western years ago, but now he’s shown getting significantly less work and only being cast as the villain. Conversely, Cliff is Rick’s stuntman, driver, and best friend, who most characters view as a sort of dangerous enigma due to his lethal fighting power, as well as the fact that he may or may not have murdered his wife years ago. Rick is one of the most interesting and entertaining characters in the movie, certainly thanks to a stellar performance from DiCaprio. Every actor admittedly brought their best to this movie, but DiCaprio’s contribution is the major standout. Throughout the movie, both Rick and Cliff (but especially Rick) have to cope with feelings of obsolescence as the world and film changes around them, no longer wanting the things that the actors are used to providing to audiences. Rick in particular has a great amount of trouble with this, visibly getting angry with himself for messing up the roles that he does receive and feeling disconnected from the acting that he used to love. One of the most unexpected but genuinely sweet dynamics is that of Rick and an 8-year-old actress that shares his passion for performance, Trudi (Julia Butters). She meets Rick on the set of a new western and impresses him with her commitment to acting, and inspires him to accept and even embrace his role as a villain in the western by giving a show-stopping performance. Cliff supports him through all of this, despite going through the same issues himself, giving himself the role of the more grounded one in the friendship. Pitt plays Cliff as more subdued so as to be a foil for Rick, but is still great and funny in his role. We also meet Sharon Tate (Margot Robbie) and Roman Polanski (Rafal Zawierucha), Rick’s next-door neighbors on Cielo Drive who he envies for their fame remaining as he feels his is slipping away. Despite her historical significance, Sharon is given a more minor and dreamy role in this retelling of history, sometimes appearing to act more like a living concept that exists only to embody 1960’s Hollywood, rather than be an actual character. It’s just a bit odd when you know that Sharon Tate is overlooked in the story of her own real-life murder in favor of fictional Cliff and Rick, but more on that later. Regardless of plot, Robbie is delightful to watch as usual and seems to be having a great time bringing her A-game.

As for the film’s antagonists, the entire Manson family is shown living at Spahn Ranch and we’re shown how they lived before the murders even began. It focuses more on a few specific cultists within the group rather than putting much focus on Charles Manson (Damon Herriman) himself outside of one scene (which normally would feel a bit off but may be for the best here, seeing as how the film is already almost two and a half hours long in its current state). The first follower of Charles Manson that Cliff and the audience meets is a teenage girl named Pussycat (Margaret Qualley), whom he gives a ride to Spahn Ranch. The other antagonists of importance are Charles “Tex” Watson (Austin Butler), Susan “Sadie” Atkins (Mikey Madison), and Patricia “Katie” Krenwinkel (Madisen Beaty), all of whom provide a genuinely menacing (if a bit over-the-top) portrayal of the real-life people that committed the Tate murders on August 8, 1969 at the behest of Charles Manson. The characters of this story are the crux upon which we experience the alternate universe version of this well-known tragedy. Events are always seen and recalled in the way that Cliff (and Rick, to an extent) would, which is made interesting by the fact that Cliff is not necessarily a good person. For one thing, it’s left completely up to the audience to decide if they think he truly killed his wife and got away with it or not. He also picks a fight with Bruce Lee (Mike Moh), whose portrayal as a braggart for Cliff to beat up is a bit uncomfortable, but can be semi-explained by the fact that we see the scene as Cliff did, perhaps not how it actually was. The film’s pacing does drag a bit for most of the runtime, only to speed it up to an 11 in the final scene, making the experience feel a bit like someone slamming your head onto a metal counter at the end of a spa treatment. However, the film does spend a great deal of time crafting immersion and giving us enticing cinematography and acting, so this jarring pace may be forgiven.

It’s obvious that Tarantino truly wanted to make an homage to the golden Hollywood and general culture that was crushed at its peak by the murderous Charles Manson and his devoted followers. That’s another thing, too: if you see this movie without knowing it’s about the events leading up to the Manson Family Massacre, that ending is going to give you twice the whiplash. Many have already complained about this fact, pointing out that having this prior knowledge is necessary in order to actually understand the plot, especially since Manson is never mentioned by his full name. You can feel the film starting to build tension for something, as the narration begins vividly describing exactly what everyone is doing at different times on the night leading up to the murders. In Tarantino’s reinvention of the events, the killers end up deciding to attack Rick’s house instead of Tate’s. They choose to do so because of Rick’s starring role in his old western show, claiming that shows like his taught their generation to kill, citing Vietnam and the like. This was another strange choice, to portray the Manson family as hippies that wanted peace and love. In reality, although they adopted the well-known hippie aesthetic and used mind-altering drugs regularly, Manson and his followers were violent from the start and also noted white supremacists, making their motivations clash directly with most major hippie talking points. Even worse, without the knowledge that the three killers shown in the film were based on real people that did succeed in carrying out a horrible massacre, it appears that Tarantino randomly decided to demonize the hippie archetypes. When they then have them slaughtered as brutally as possible by our main leads, this coupled with the misrepresentation of the killers as traditional hippies seems to imply that the peace-loving hippies were the most violent of all. This brings in unfortunate implications and questions about what the film is trying to say concerning both older and modern sentiments/groups against war, guns, and violence that are currently in the world’s spotlight again. In reality, this was most likely not a purposeful message sent by Tarantino, but it may have been a good idea to make the real message (one of fictionalized revenge against the Manson Family for the crimes that they committed that brought an end to the 60’s and its spirit in America) much more prominent so as to avoid this confusion that many viewers have complained about. 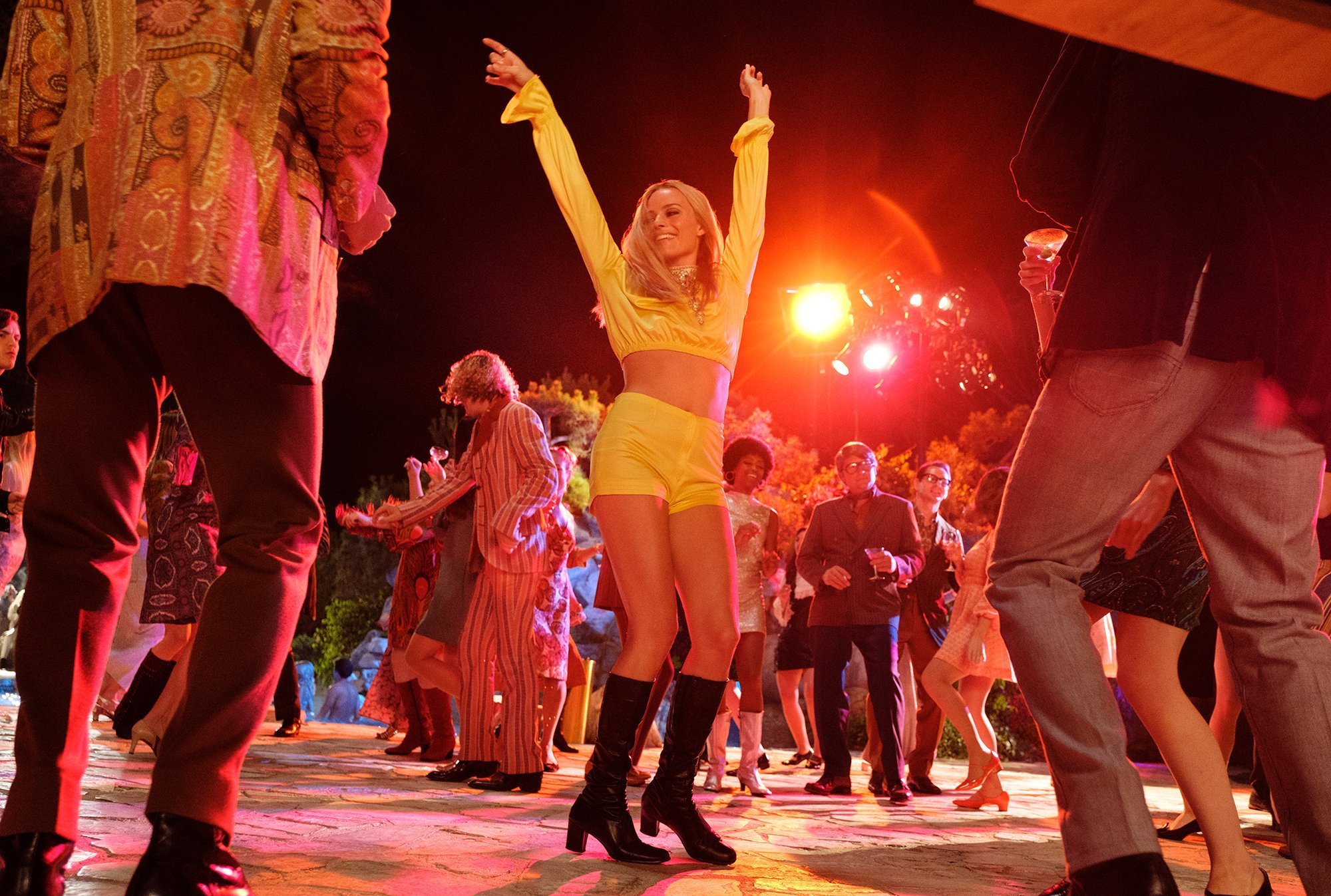 So, as a word to the wise, having a basic knowledge of Charles Manson and his cultists before seeing Once Upon a Time in Hollywood is highly recommended if you don’t want to leave with a bad taste in your mouth. If you do enter the movie already knowing how history goes, the pure shock of the ending isn’t lessened in the least. This is, as the title would suggest, Tarantino’s fairytale, which means that the would-be murderers meet a different fate in this world. Instead of killing a pregnant Sharon Tate and four others, the group invades the home of Rick Dalton, who is relaxing in the pool while Cliff tries acid and cares for his Rottweiler Brandy. When the group breaks in and tries to kill everyone in sight, Cliff and Brandy attack them in increasingly gruesome and almost cartoony ways as the scene progresses, and at the end Rick finally notices the fight and finishes off the last follower with his flamethrower (a prop that he kept from a previous role). Like I said, completely over-the-top and crazy. This ending is what left so many viewers shocked and extremely split in opinions. In the end, your view on this ending is going to be shaped by your personal taste for shocking final twists, as well as your amount of knowledge surrounding the Manson Family. Personally, I felt it could’ve used a more direct message as previously mentioned, as well as some foreshadowing for this ending much earlier in the film. Even simply changing the pace to feature more of a gradual tone shift would’ve been greatly appreciated, but it was still overall an impressive and brave twist to have pulled off as is. The movie itself is the same way: could be improved, but still quite an impressive spectacle. The performances stand out as the best feature of the film, with the dynamic camera shots and attention to visual detail that immediately drew the audience into Tarantino’s fairytale world of the altered past also being praiseworthy. It’s a moviegoing experience that leaves much of the inferences up to you, and that can be freeing in a way. So go take a look and see what Once Upon a Time in Hollywood means to you, there are no wrong answers here. 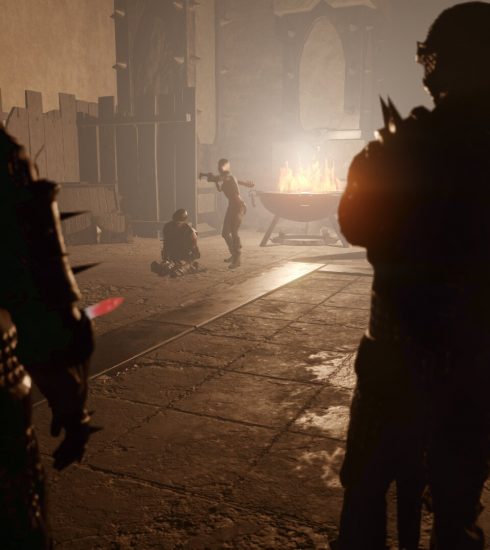 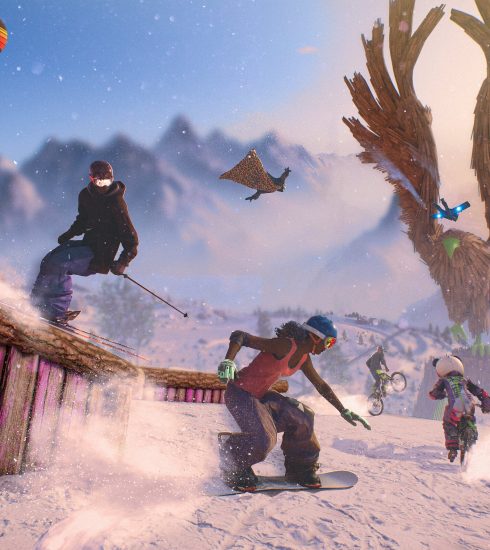