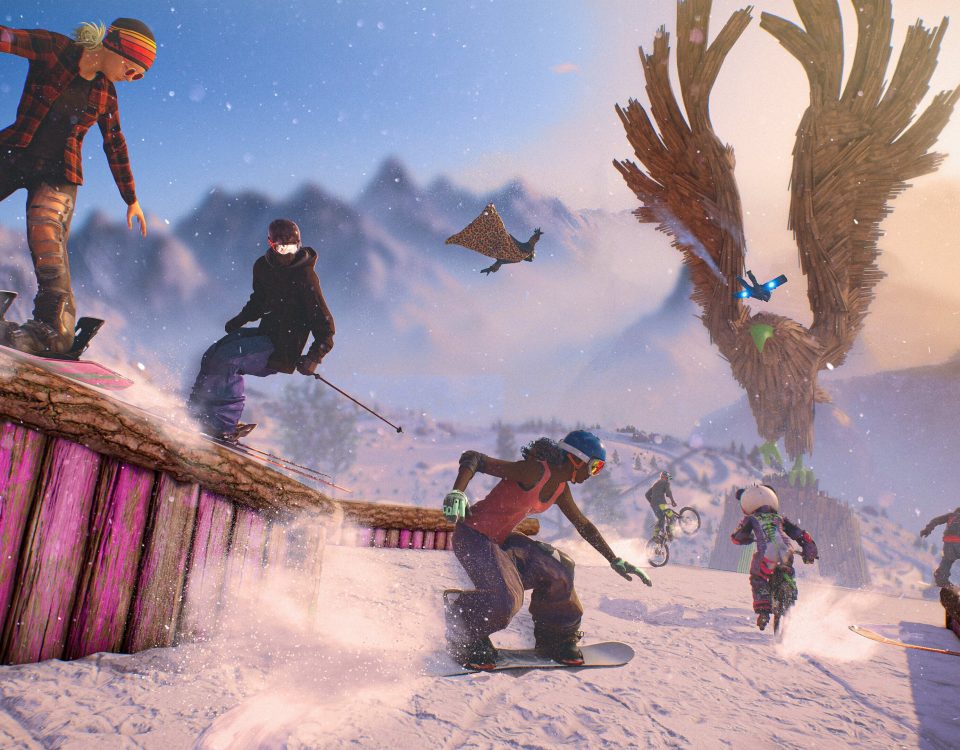 What do open-world racing games do wrong that Riders Republic does right? They focus on car racing, while Riders Republic allows you to race with a wide variety of unconventional vehicles – even parachutes.

Ubisoft’s newest game is an open-world racing game that drops you into a vibrant world where you can immerse yourself in the fun and chaos. Whether you want to snowboard wearing a bunny hat, or you want to get to the top of the leaderboard in a onesie, you can race the courses you want, and at your own pace.

Read on to find out what we thought about Riders Republic, and if it’s worth buying. 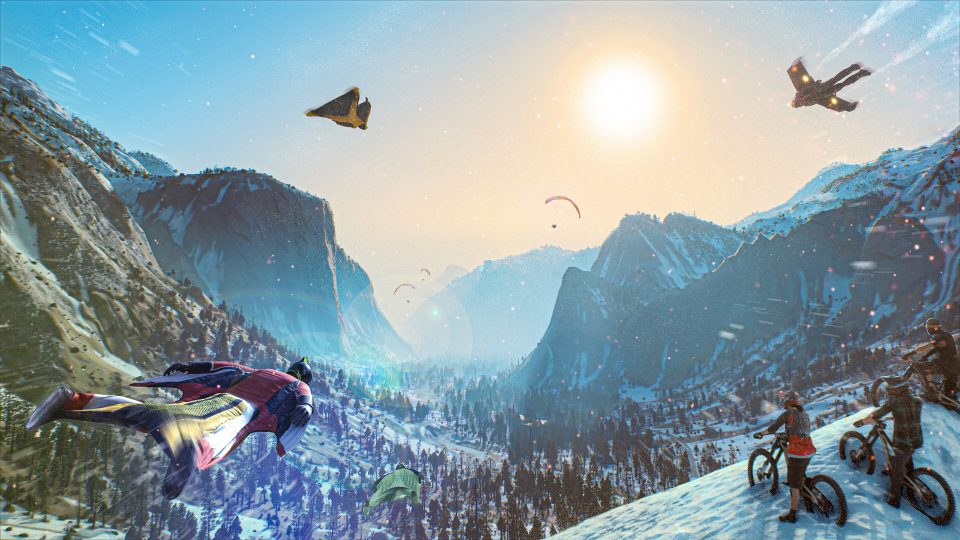 Gameplay
At the very start, Riders Republic throws you into a race where you have to complete a variety of sports – all of the sports you’ll unlock over time. We guess it’s a good thing that the game’s “introduction” tells you what experiences to expect from the get-go. Your first bike isn’t the best, but as you complete more races and events, you’ll eventually be able to buy better gear with in-game currency.

In order to level up, you’ll have to complete races, events, and contests. You can also level up by grinding your way through the game – in other words, with points that you can earn if you do enough stunts. Over time, you’ll also be able to unlock “Boss Events” and “Big Events” that aren’t that noteworthy – if anything, what they do is allow you to win trophies. The events also let you check if the tricks you’ve learned are the tricks you should learn at your level.

Zen Mode is where you can really see how wide Riders Republic’s open world really is. Once you escape “Career Mode”, you’re free to do whatever you want, go wherever you want to go, and ride whatever you want to ride. The game gives you complete freedom and control. And despite free-roam being so vast, we didn’t notice any slowdown, nor did we have issues with the framerate. Players were able to spawn without a problem.

In Riders Republic’s “Zen Mode”, you can explore the world in whatever way you want. Unlike “Career Mode”, it unlocks all of the vehicles that you’d otherwise have to work for – even vehicles that aren’t available in certain events. Zen Mode is a great way to experience the game if you’re too lazy to work your way through the ranks. 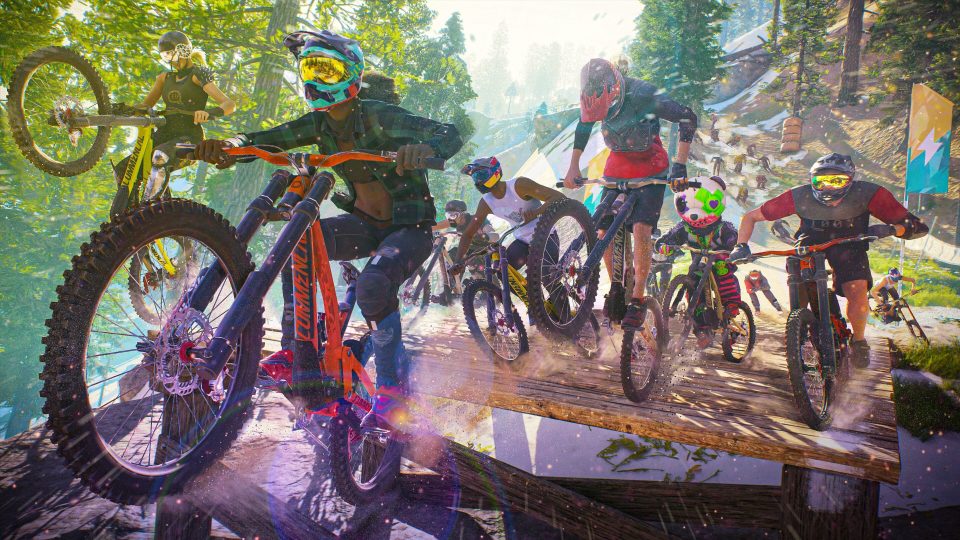 Multiplayer Mode
The game is populated with players who are also snowboarding, skating, and biking their way through. With that said, you will never feel alone in Riders Republic as you’ll always have a player’s Mario Kart-like ghost data by your side. However, with how populated it is, it does feel too chaotic at times.

One of Riders Republic’s stand-out features is its Mass Race. In a Mass Race, a server-wide voice welcomes all players to participate in the 64-race. It is chaotic but that’s the mass race’s charm. The chaotic way that players fling themselves off of cliffs and crash into obstacles can be a comedic sight.

As you might’ve guessed, these mass events tend to be buggy. We played Riders Republic on the Xbox Series X, and more than once did we get thrown into the main menu. Even if the game doesn’t crash, there are still a couple of glitches that will frustrate you if you want to finish the race first.

Free For All and 6V6
If competing against 63 people is too complicated for you (or if you’re too frustrated with the crashes), you can count on Riders Republic’s ‘Free For All’ or ‘6V6 Arena’ modes to satisfy your desire to win. In Free For All, the game tests your skills against 11 gamers and scores you according to your position. In 6V6 Arena, a co-op competition mode, your team has to fight it out against another team of 6 players.

These multiplayer modes are a way to pass the time if you’re tired of Career Mode and if you want to roam the world with your friends. In Riders Republic, you can create “Social Groups” of up to five people, so you can play co-op or particulate in multi-player events together. 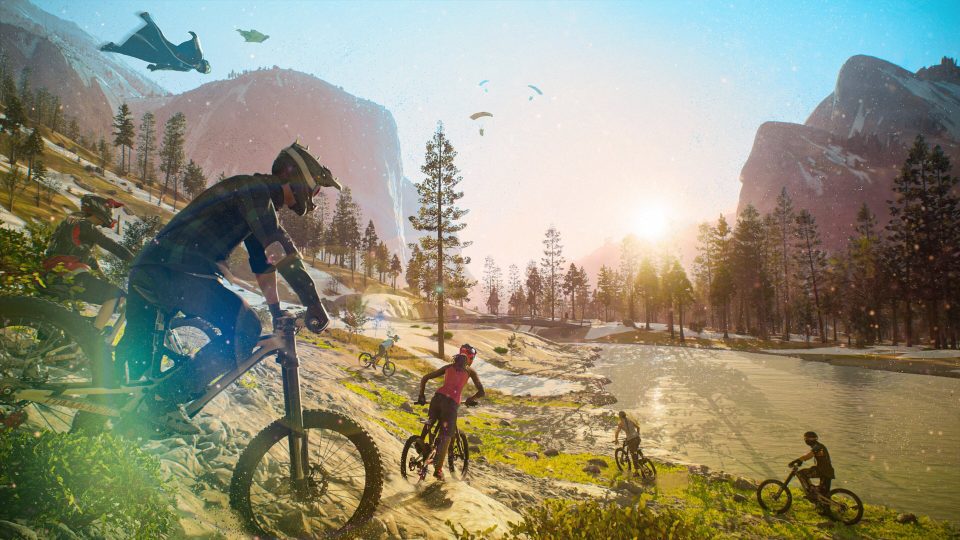 Our main concern involves the camera perspective. You’re supposed to go fast in Riders Republic, but it seems like the cameras can’t keep up with you. For example, there was one time when the camera wouldn’t stay inverted on the Y-axis. And when we activated the inverted camera, it caused our avatars to walk backward, as well.

Character Customization
On Riders Republic, you can create a virtual version of yourself – and make it a bit more “out there”. From purple hair to a purple unicorn head, you can be whoever (or whatever) you want. The developers went all-out with the costumes, so you can make your avatar look as wacky as you want. You can also spend the in-game currency on cosmetic upgrades, so your character can blend in with the world’s freakish flair. Want to snowboard dressed in an inflatable dinosaur suit? Go for it.
Graphics
Riders Republic throws you into an open world where the walls look like they’re splattered with neon-colored, glow-in-the-dark paint. You’ll be in awe of its art direction and of how colorful the world is, you’ll feel alive every time you get in the game. The overall vibe is electric, but its textures are a bit pixelated. This, however, is not a dealbreaker as the game is so fast that you’ll forgive (or even overlook) these flaws. 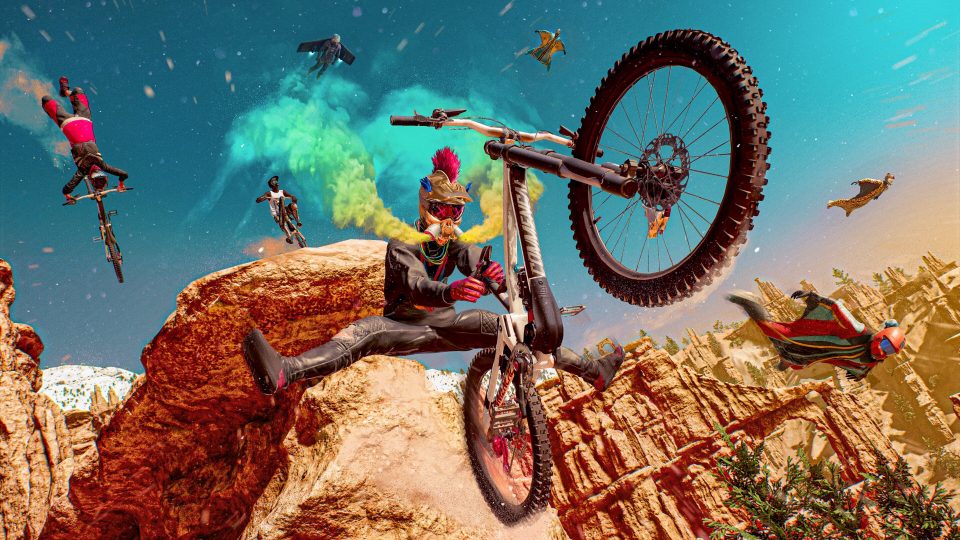 Soundtrack
The sound design is in a league of its own. It’s upbeat, as it should be, and builds up as the momentum changes. If there was one way to describe it, it would be that the sound goes with the game’s electric energy. Its soundtrack is sprinkled with artists like Green Day and Wiz Khalifa – kind of out of date, but still does the trick.

What we found impressive was how the music would switch to make every race more immersive than they already are. You could be snowboarding with classical music in the background, or biking through the woods to a soundtrack that makes you feel like you’re in an action-packed film. For a comedic flair, the game might even play “Gangsta’s Paradise”.

Should You Buy Riders Republic?
If you want to satisfy your need for speed, Riders Republic is perfect for you. Yes, it has a couple of bugs and it can be chaotic at times, but don’t let these problems overshadow what it’s all about – it’s an open-world racing game that can be whatever you want it to be. If you want to play it for the competition, go for it. You’re also free to play it solely for the fun – the chaos is simply part of its charm!

Want to escape to an open world where you can snowboard, bike, ski, and more? This Ubisoft game is your best bet. We’ve played a number of open-world racing games, but Riders Republic is in a league of its own.

Riders Republic can be played on Xbox One, Xbox Series X, PlayStation 4, and PlayStation 5. Buy it on the official Ubisoft website. 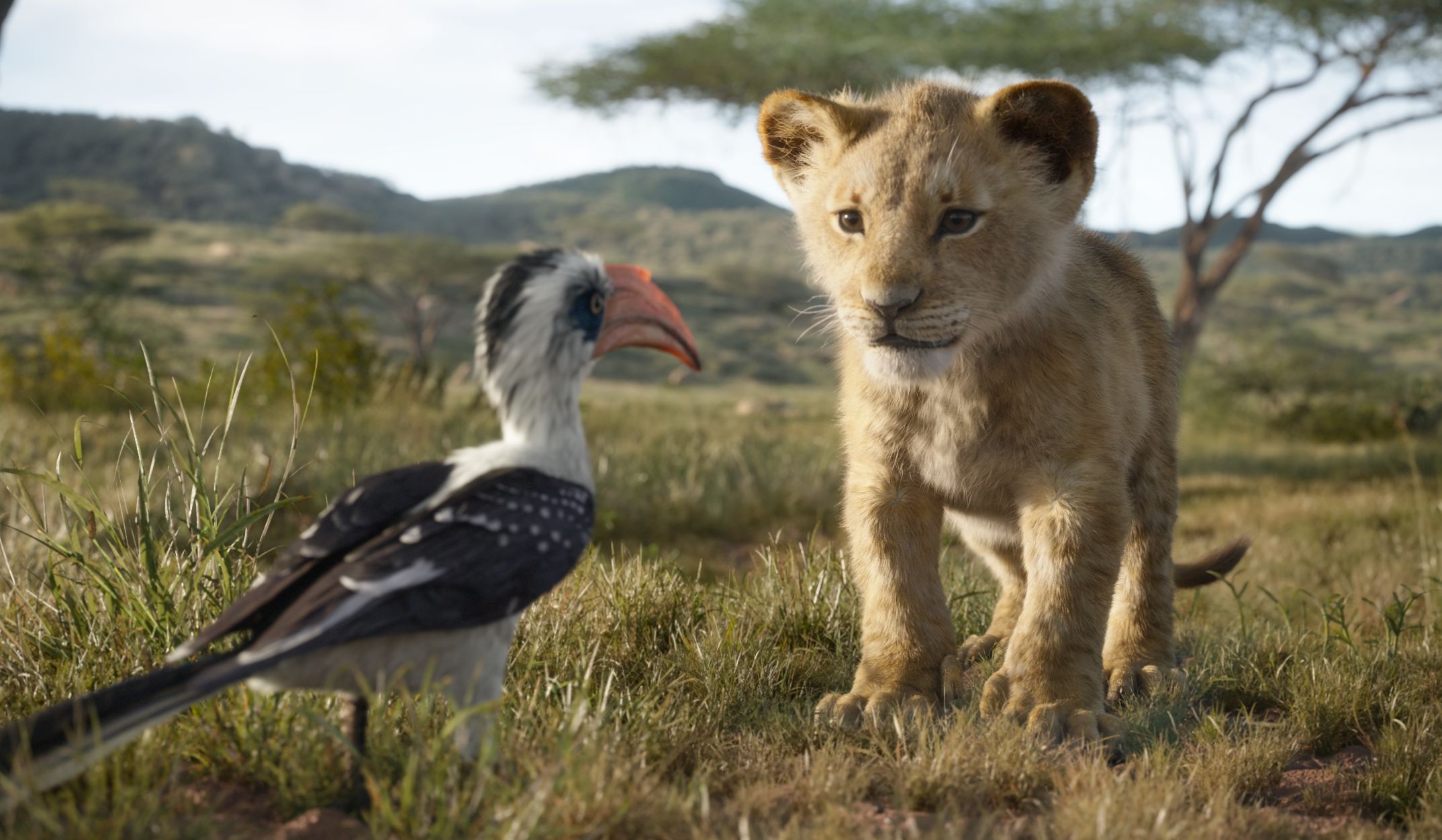 Review: The Lion King (2019) – Roars To Life With Indomitable Visuals 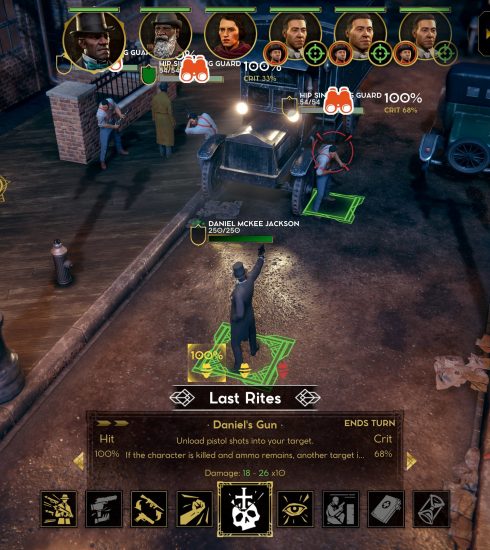 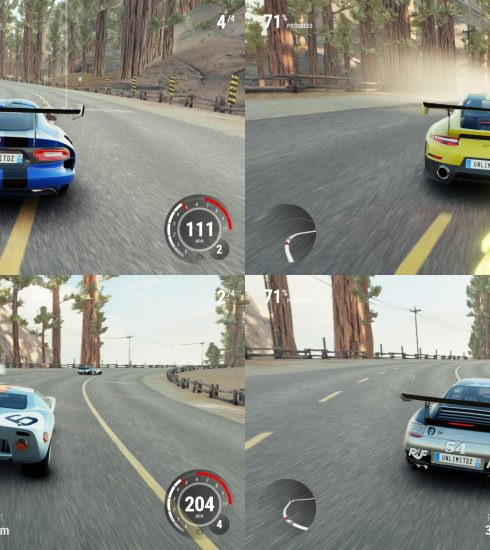