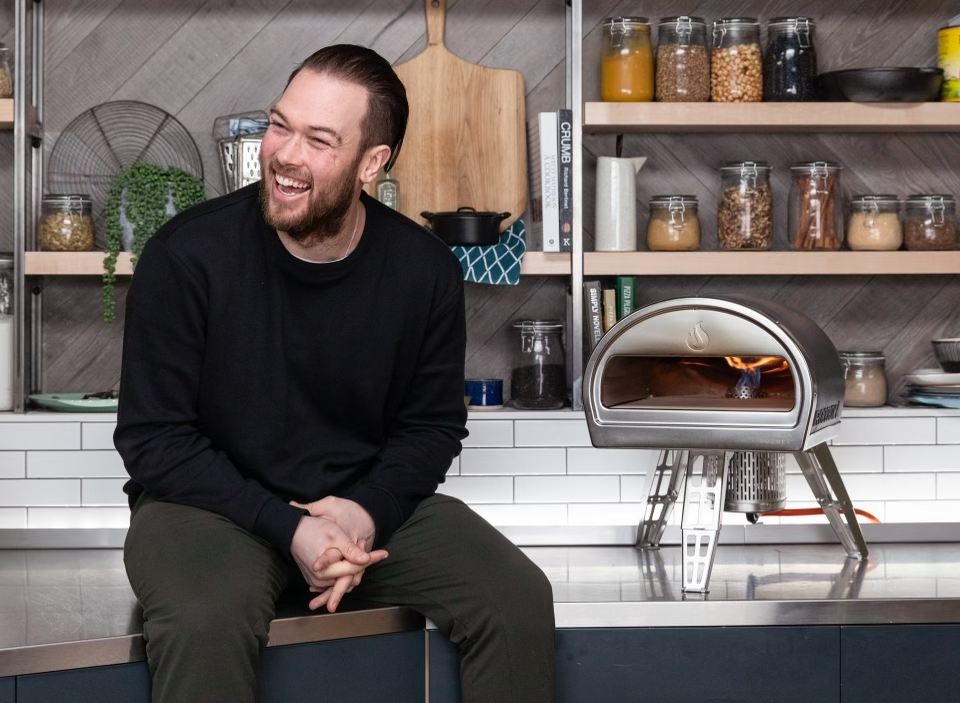 One of our traditional hallmarks here at SonnyDickson is not only to report on and demonstrate new innovations, but also to give you a peek behind the scenes at the people, the ideas, and the deeper driving concepts that result in these products being available for you at home. Today, we bring you just such a story – about pizza, determination, healing, and a man named Tom Gozney.

We had the chance to spend some quality time with Tom Gozney (CEO of Gozney, Inc.) recently, who’s inspirational success story shows the value of determination, self-care, healing, and pursuing your passions – in this case, pizza, and more specifically, brick oven style pizza. This story, however, is not about layers of sauce, cheese, and toppings on top of a crispy, delicious handmade dough – no, this story is about: the bigger tale behind Gozney’s journey into the world of home pizza ovens; the bigger question of when and why his passion was able to transform into his reality.

Unlike many business leaders, Tom had a number of challenges to defeat before he could even get started. He reports having had a great deal of difficulty throughout traditional formal education due to strong dyslexia and other issues, which took a significant toll on Gozney’s self-esteem and self image. By his mid teenage years, Gozney had become involved in drugs and heavy drinking, which reached its climax when Gozney was 21, in which he was committed to a rehab center for nearly a year.

As you might imagine, spending nearly a year in rehab recovering from his addictions gave Gozney a lot of time to heal, and a lot of time to think about the future, and what he wanted to do with his life. When he was released from rehab, he knew that he had to make big and lasting changes. He had to completely re-evaluate the friends he spent time around, grappled with a sense of alienation due to no longer having the same social habits (related particularly to drinking) as the bulk of his peers.

Part of the incredible adjustment of coming out of rehab for Gozney was finding a new purpose, so he immediately threw himself into something he loved – cooking and entertaining. Gozney found cooking to be highly therapeutic, and notes that it helped him avoid distractions and keep himself on track for recovery and success – while simultaneously putting in the challenging work of avoiding situations from his previous life, and even cutting off people that no longer fit in his new world of healing and discovery.

After determining that cooking pizza in his traditional home oven was just a sub-part experience, and didn’t give him the satisfaction he knew he could achieve, Gozney set his efforts on redesigning the traditional brick pizza oven. He started by building a full-size traditional brick oven in his backyard, and then started to build them for friends, finding cooking, especially cooking with fire, to be a “a primal and magical experience” that he wanted to share with the people he cares about.

By 2010, Gozney had launched his first company – Stone-Bake Oven Company – and by 2013, he began manufacturing commercial pizza ovens for the U.K., starting a huge trend surrounding Neapolitan pizza in the area. Throughout the process, Gozney started his journey into learning about business and  manufacturing, pioneered a system for installing a full commercial oven in a day. and was one of only two companies to get Clean Air Act exemption for use in smoke-controlled areas due to the incredible fuel efficiency of his ovens. He even eventually became the U.K. market leader for commercial pizza ovens.

And all of that brings us to the modern day, in which Gozney has successfully launched into the consumer market with the first portable stone-based ovens on the market, which began with their crowdfunding campaign for the original Roccbox in 2016.

And there you have it – a story of a struggling addict who took his own life and future back into his own hands, pushed through the pain and challenges associated with healthy recovery from addiction, and harnessed that to pursue his passion and become the industry benchmark for commercial and portable stone-based pizza ovens through innovation and creativity – which echoes the advice that he offers to young inventors:

So many out there are intimidated by stepping out into the unknown – a distinct choice that he made that he was going to be fully in charge of his own journey.

It’s about finding mentors to fuel that raw ambition – about not being afraid of failure, and willing to do what it takes to bring their passions to life.

What is so beautiful about Gozney’s journey to me is that he did it for himself. His legacy is a true and noble one of overcoming the weaker nature that humanity often succumbs to, made it his mission to succeed, and used that as a springboard to become one of the leading innovators in modern commercial and home use portable stone ovens.

The passion and dedication that brought him to life’s high point makes for a stunning tale of overcoming adversity.

If only we all paid such diligence to our passions – what a world this could be!

To read more about Gozney’s extensive line of consumer and commercial products, head on over to their official website for all the relevant details!