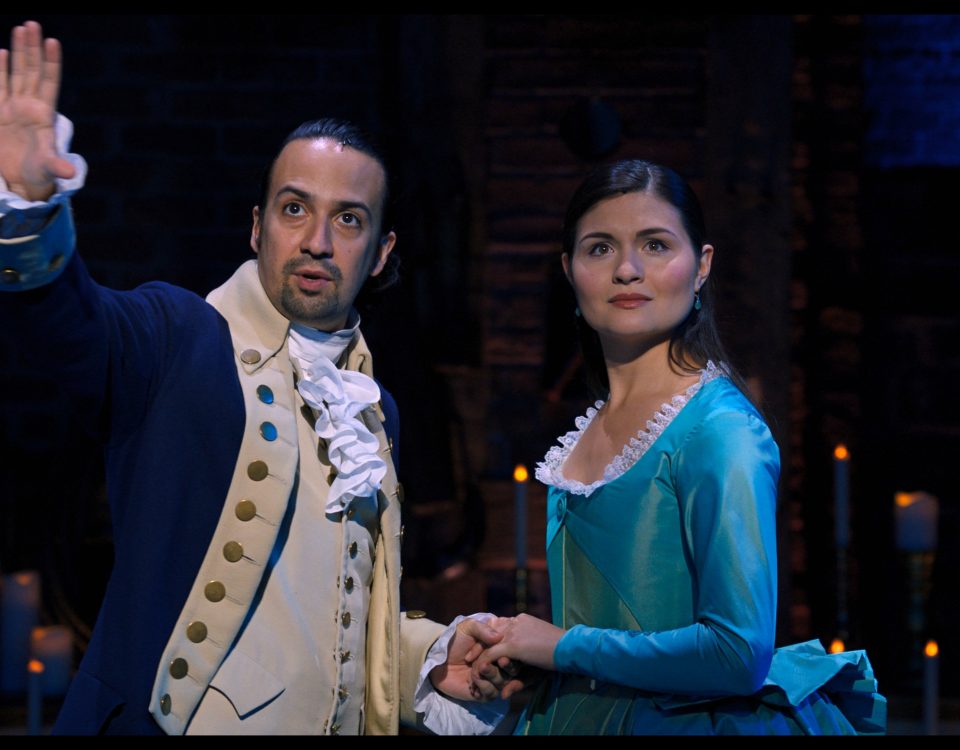 To say that Hamilton is a cultural phenomenon is almost an understatement. Since the musical first hit the big stage in 2015, it’s gained heaps of positive acclaim and a large unexpected fan following that have planted this play firmly in the cultural zeitgeist. A hip-hop musical about the founding fathers may have earned odd looks and scoffs at the beginning, but over time has garnered a following large enough to rival all other musicals, historical revolution-based or otherwise. However, despite its insurmountable fanbase, Hamilton could only be seen on Broadway or on one of its tour stops for years, so many fans had to simply be content with memorizing the cast album if they couldn’t get tickets. But finally, we heard big news: the original Broadway cast had been recorded before they disbanded, and we would finally get to actually see Hamilton. Originally, it was meant to land in theaters, but due to COVID-19 throwing a wrench into all of our pre-planned 2020 events, it was decided that it would instead be released on Disney+ on July 3. Suddenly, the cost of seeing Hamilton was no longer a plane ticket and expensive seating, but only $6.99 a month to get professional close-up shots of the entire play. Needless to say, fans went a bit wild. Even people that hadn’t yet seen it were able to experience it, making it far more accessible to the general public. But how did Hamilton translate from the stage to the filmed stage of Disney+, and is it worth all the hype its receiving? Let’s discuss the phenomenon of this rapping founding father and see how this film lives up to expectations. 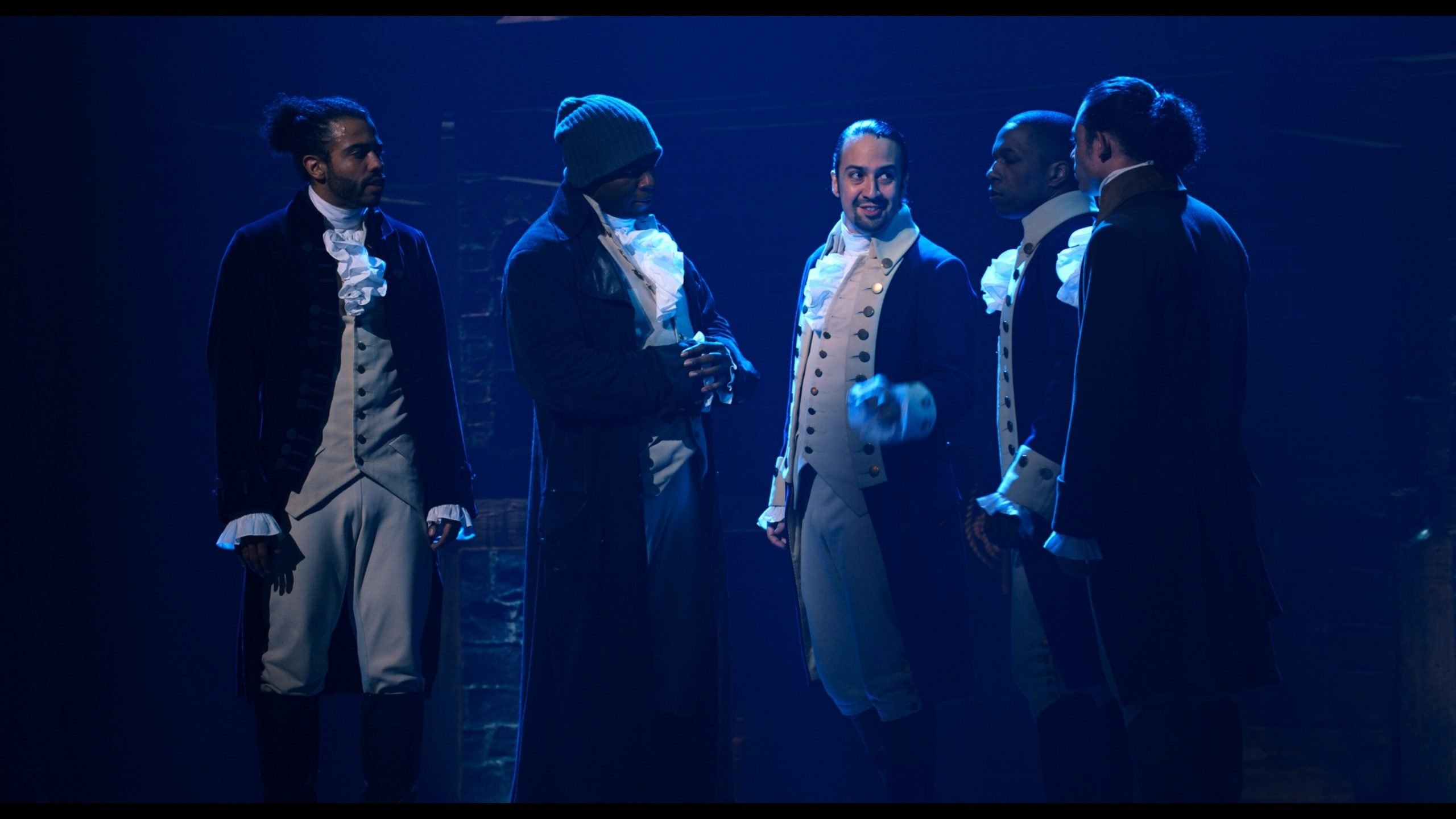 Hamilton follows the life of the founding father on the American ten dollar bill, Alexander Hamilton. Born poor in the Caribbean, becoming an orphan, writing so well that he’s able to travel to New York and join the American Revolution and create an entire government from the ground up. Through the good, the bad, the ugly, and the tragic, we see all of the things that Hamilton did and believed in, especially focusing in on his relationships with people along the way versus his commitment to his work. Every character oozes charm without any being overly perfect, and the fact that there is little spoken dialogue works well in this case. The music is nothing short of genius, from lyrics to melodies to leitmotifs. The leitmotifs in particular are fantastic at tying together characters to each other as well as ideas. For example, Aaron Burr’s iconic “Wait For It” musical number establishes what his character is all about in the middle of Act 1, but both the phrases and musical melodies used in the song come back throughout the play to keep us grounded in his character thesis that we heard in “Wait For It.” Not to mention the fantastic lyricism of each song, most notably “My Shot.” Lin Manuel Miranda is famous for have written, composed, and starred in this play, and he is a powerhouse for all that he does. Look up a video or article of professional musicians breaking down the musical and lyrical components of any Hamilton song, it’ll give you a brand new appreciation for Miranda’s ability to sprinkle in subtlety and foreshadowing that you may not even fully realize otherwise. 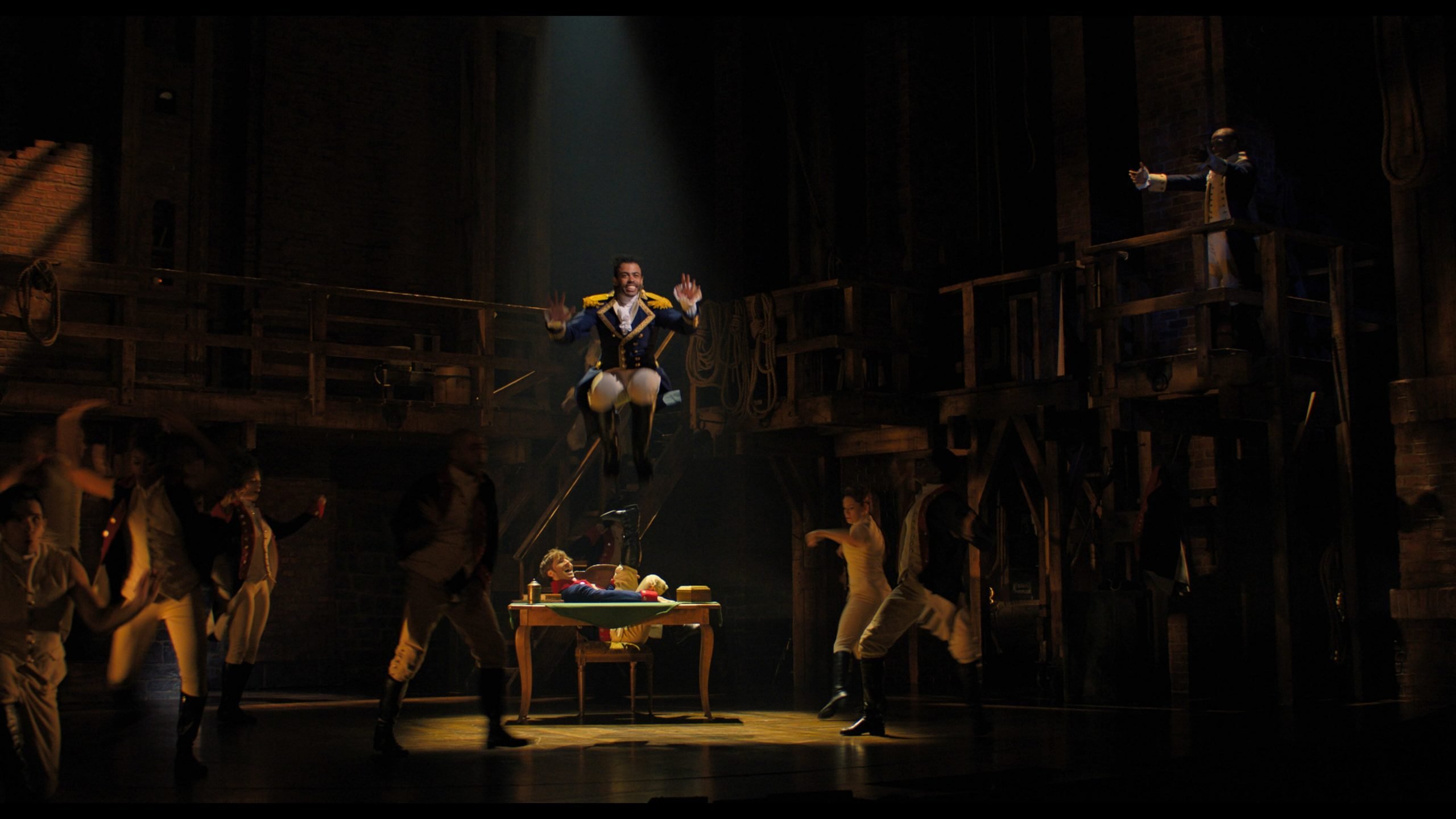 Musically, the play is great, but a talented cast is needed in order to properly showcase it. Luckily, this original Broadway cast has talent in spades. There are no weak links in this chain, everybody is giving it their all throughout the performance. I was able to see Hamilton live with a later cast, all of whom did good in their roles, but this original cast feels like they were made for these roles. Leslie Odom Jr. as Aaron Burr, the sympathetic villain of the show, was an impressive standout in both acting and singing. My personal favorite musical number was “Satisfied,” performed by Renée Elise Goldsberry as Angelica Schuyler, fully equipped with powerful vocals and a spinning turntable stage. Phillipa Soo as Eliza Schuyler acts as the beautiful emotional core of the show, and it’s impossible not to love her. Christopher Jackson as George Washington gives us a heartfelt, believable performance and does great on his solo songs as well. Jonathan Groff as King George III is also a fan favorite despite only appearing in three songs, and for good reason. He’s as threatening as he is hilarious, with a catchy song to boot. And of course, there have to be special admirations shown to the actors putting in overtime by playing two completely different characters in Act 1 versus Act 2. Daveed Diggs deals out the fastest rap sequence in Broadway history as Marquis de Lafayette in Act 1, and then lets his hair down to become the insufferable antagonist Thomas Jefferson in Act 2. Anthony Ramos plays both Alexander’s closest friend and abolitionist John Laurens in Act 1, then switches over to being Alexander’s son Phillip in Act 2. And finally, Okieriete Onaodowan performs as the third in Hamilton’s revolutionary quartet, Hercules Mulligan, in Act 1, and then as Thomas Jefferson’s best friend James Madison for Act 2. It honestly would feel remiss to not mention every actor present, because they all contribute to the amazing end product, but to praise them all as they deserve would take many more words than I am able to write here. 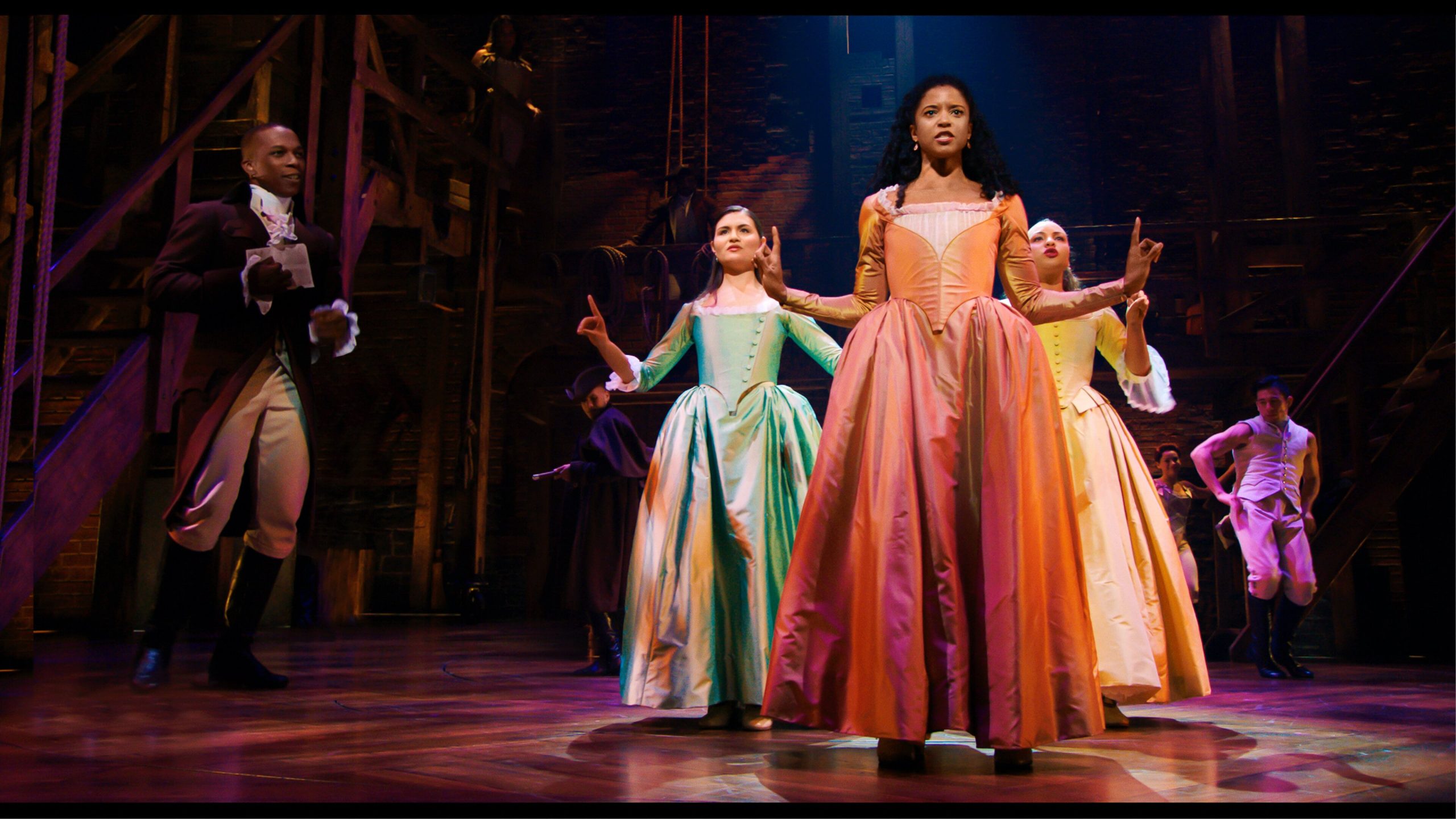 A unique point of Hamilton is that usually when you hear of a musical coming to the big (or little) screen, many people will immediately imagine it as an adaptation rather than a direct filming of the stage play. Les Mis, Chicago, and soon even Lin Manuel Miranda’s other hit play, In The Heights, are some famous examples that opted to fully change their format to that of a movie musical instead of a stage musical. Each has its own pros and cons, but one feature is that movie musicals will have to change quite a bit in order to be a movie, but filmed stage musicals can be shown in their original form, minus only the excitement of seeing real actors in front of you live. While a full movie adaptation may still be in the cards for Hamilton somewhere down the line, for now this is how they’ve chosen to present it to audiences. And honestly? It’s extremely refreshing. Filmed Broadway musicals are notoriously hard to come by, so it’s great to give audiences the experience of seeing Hamilton live from their own houses. Not to mention that making Hamilton into a full-fledged movie musical would be wildly difficult given how unique it is. Not impossible, but easy to mess up (just compare how people reacted to Andrew Lloyd Webber’s Cats on Broadway for years versus the horrific 2019 Cats film adaption). If Hamilton ever does get this treatment, hopefully delicate care will be put into changing some things for the better, yet keeping the elements that people loved to begin with. For now, Hamilton on Disney+ rises up above the rest. It’s made Hamilton accessible to more people than ever before, and hopefully will open the doors to even more professionally recorded musicals being made available to the general public. Then theater can become a much more widespread medium with a much smaller paywall, as it should be when it comes to art. Not to mention the beautiful camera angles and close-up shots that you’d never be able to see otherwise. If you’ve never seen Hamilton, go watch it on Disney+. And if you have seen Hamilton, go watch it again on Disney+. Seeing it like this is a completely new experience that still has all of your favorite parts. 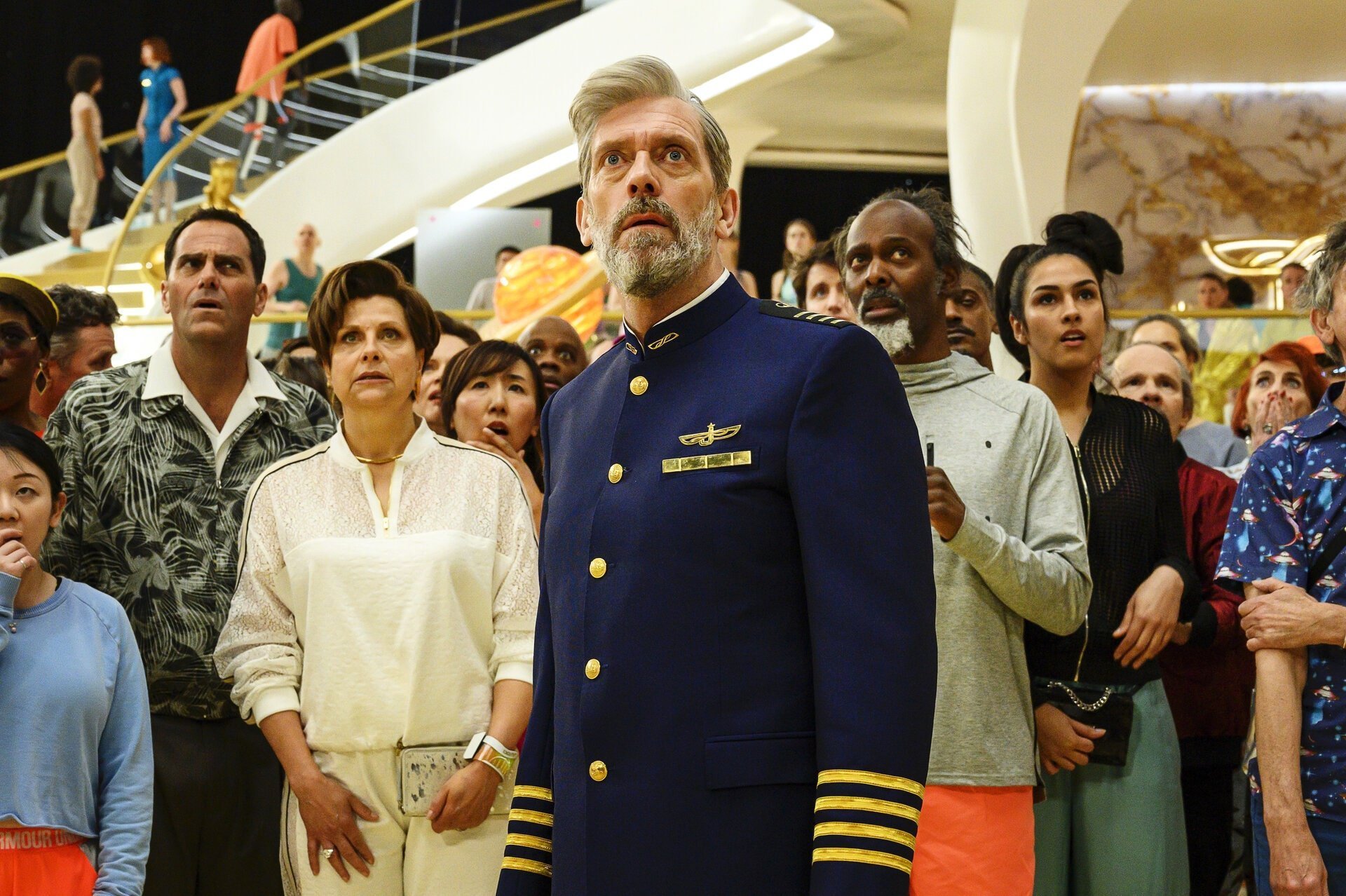 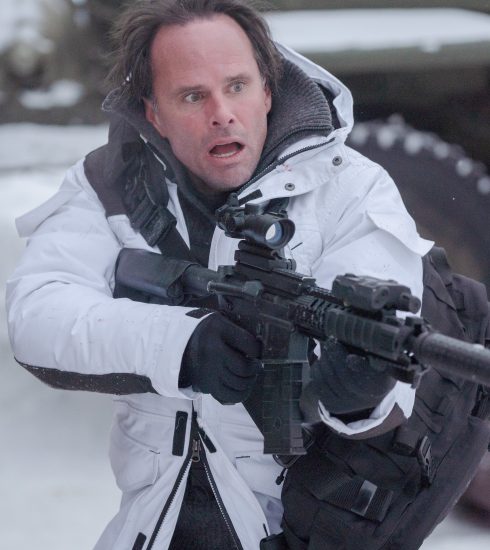